Houston, TX. – Young Christians from across the United States exercised their right to protest immigration policy today in Houston calling for reunification of families separated at the border. The action was organized by young people from the Chicago Synod during the Evangelical Lutheran Church of America (ELCA) Youth Gathering in Houston where 30,000 young Lutherans from across the US have gathered this week.

The theme for the 2018 ELCA Youth Gathering is “This Changes Everything” and Chicago young Chicago Lutherans are looking for change in the way our nation treats vulnerable migrants who cross our nation’s borders.  17 year old Maggie Peyton from Holy Trinity Lutheran Church in Chicago’s Lakeview neighborhood says, “My mother always taught me that no human being is illegal. These are people who not only need help and guidance, but they need a chance and we as a people and a nation have to be willing to give them one.”

The #FamiliesBelongTogether rally for ELCA Youth Gathering Participants occurred  outside of the NRG stadium at today with speeches, chants, and songs. The action included opportunities for youth to call organizations and legislators, the chance to write letters to elected officials, sign a petition, make cards for families in detention centers, and opportunities to participate in a social media campaign using the hashtags, #FamiliesBelongTogether; #elcaYG2018; #WhoWouldJesusDetain.

As 14-year-old Roxy Mendez from First Lutheran Church of the Trinity in Chicago’s Bridgeport neighborhood says, “I care about this because if other children aren’t safe then no children are safe.”

The ELCA youth gathering is a triennial event involving 30,000 participants from around the country.“Family detention is not a new issue and it is not an issue that can be ignored or taken lightly,” said Peyton. “These are people who not only need help and guidance, but they need a chance and we as a people and a nation have to be willing to give them one.”

The protesters called for speedy reunification of families that have been forcibly separated at the border. 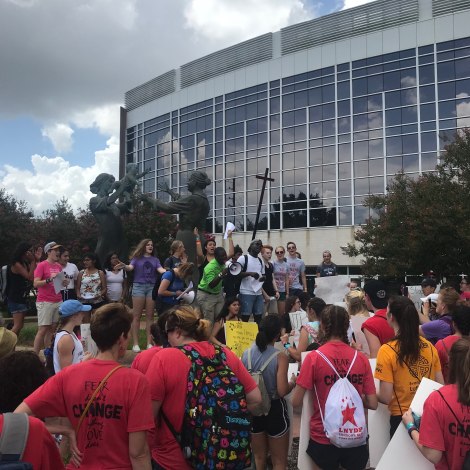